"Everything is awesome about this drum set" 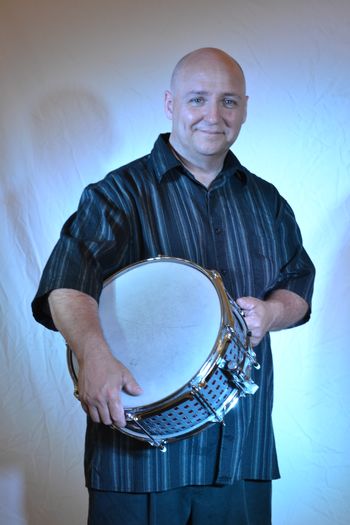 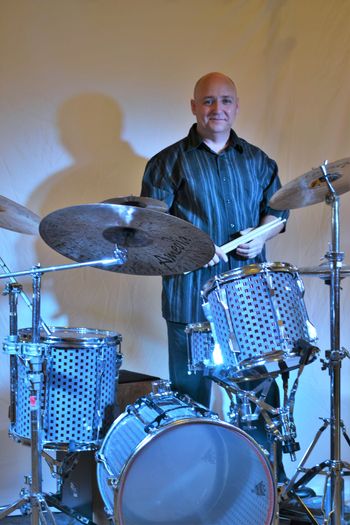 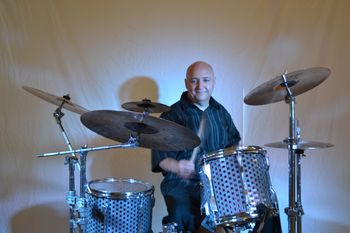 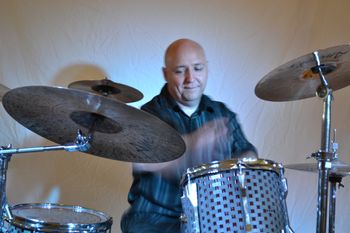 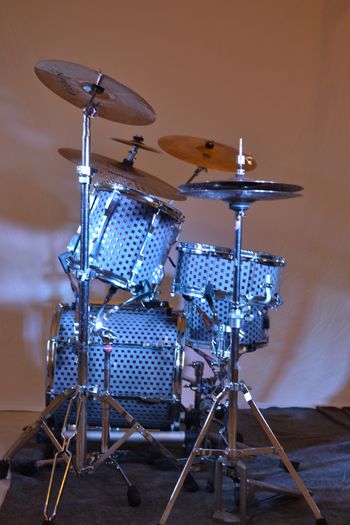 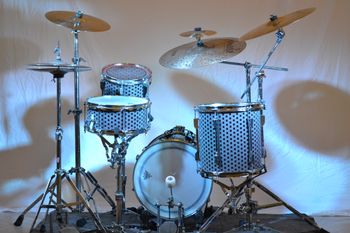 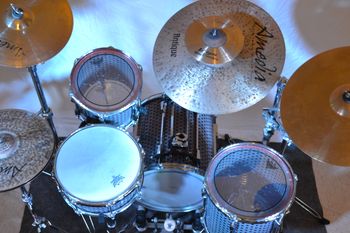 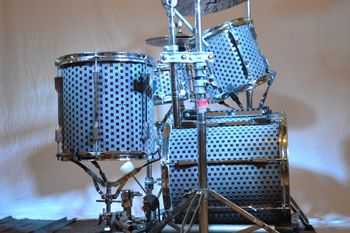 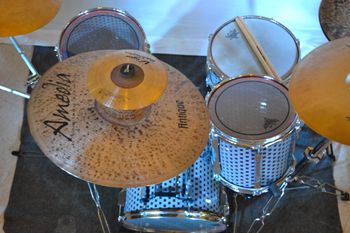 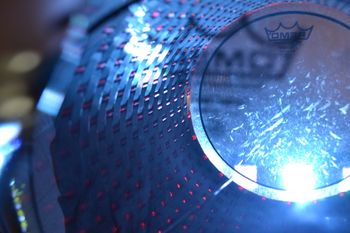 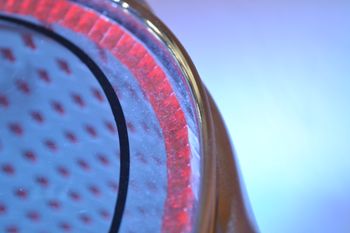 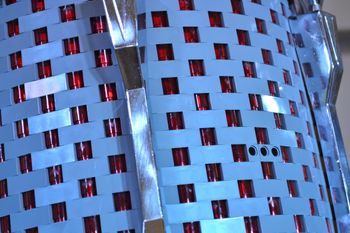 Percussionist Brian Melick with the first LEGO drum kit he constructed and completed earlier this year. The shells of each drum are made of different types of LEGO pieces, but have traditional metal lugs and parts to make the instrument musical. Melick uses the set in professional performances throughout the Capital Region, and is donating a second drum set to the Percussive Arts Society museum, the Rhythm! Discovery Center in November.

NEW BALTIMORE — When Brian Melick was a child, he enjoyed banging on pots and pans like others his age, but his fun grew into a lifelong passion.

Around age 6, Melick, of New Baltimore, became interested in rhythm and percussive music with a drum set made out of coffee can, a Quaker Oats container and other unconventional objects using metal rods as drum sticks.

“I had my little collection set up in the corner in the living room,” Melick recalled. “I would go play it for hours, and I’d lose myself in it. My mother once told me, when I started playing drums and music, I came out of my introverted shell and I was a different kid.”

Melick has performed as a professional percussionist for the past 35 years, and experience playing drums from all over the world.

As a featured artist on more than 375 recordings, Melick said music is his life, and is something that can be found in ordinary objects from the clanging of car parts to the ticking of a turning signal.  “Rhythm is everywhere,” Melick said. “You can groove to just about anything.”

Melick said when his son, Evan, was a child, he often listened to him thrash LEGO pieces about to search for the perfect brick.

“As a percussionist, I’m always looking for sound, and that sound intrigued me,” Melick said.  What started out as using LEGOs to create shakers and rattles recently turned into a bigger project than Melick never could have imagined.

For family time, Melick has taken Evan and his daughter, Brianna, to the LEGO Brickfair convention in Chantilly, Virginia, since 2010.

At the 2013 convention, Melick said he watched two children creating an arc out of LEGO pieces several different ways, and a light bulb in his head flickered on.  “When I saw this, I had an epiphany,” Melick said. “I could create a drum – a snare drum out of LEGOs. How incredible would that be?”

Melick said he shared the idea with his son to learn how he could make his idea become a reality.  “When my dad saw there were ways to put LEGOs together to make a circle, he was really excited,” Evan Melick said. “He realized he could completely replace the wooden part of a drum with LEGO.”  The father-son team designed a drum shell that could be constructed with bricks called cylinders, round plates and triangle-shaped pieces called slopes, and found an abundance of the pieces at the “Pick a Brick Wall” at the Tyson Corners LEGO store during the convention that year.  With a few hundred bricks, Brian Melick said he created the snare drum shell in a corner during Brickfair’s “After Hours.”

Melick said that when he returned home to Greene County, he proceeded to complete the drum by following the strict rules of the LEGO Builders to honor the brick — not cutting, drilling or gluing the small, plastic pieces.  “I could have made a replica of a snare drum with LEGOs, but I wanted an instrument that would actually work, and something that, as a musician, I’d be able to professionally perform and record with,” Melick said.  The drum itself is made of LEGO bricks, but the rims, lugs, screws and drum head, or the part a drummer strikes and what resonates to create sound, hold the drum together and are made of traditional metal and plastic materials.  “That’s what makes it really work,” Melick said. “You hear a beautiful sound because it’s able to vibrate, and air is able to move around inside. The materials like the metal lugs and drum head that sit on the shell make this a musical instrument, but without the LEGOs, there is no drum.”  Melick said the first time he tuned the drum and hit it, his son flew down the stairs within seconds exclaiming, “Wow, that sounds great!”  “Let’s just say, the jaw dropped and the eyebrows went up,” Brian Melick said, smiling. “I had no idea what to expect. You can tune a drum to a very specific pitch, and the sound changes depending on the material it’s made with. This could have sounded poorly, but it didn’t – I made a drum that was able to be musical.”

Evan Melick, who also played the drums throughout middle and high school, said the instrument has an incredible tone and sound quality.  “We originally thought this drum would just be a novelty,” Evan Melick said. “We assumed it would just sit on a shelf somewhere. When Dad finished it, we found it was one of the best snare drums either of us had heard in our lives.”  After his success with the snare drum, Brian Melick continued the project to create a bass drum earlier this year, followed by a ride and floor tom to complete the professional-quality drum set.  A few days’ work, about $800 without labor and 8,016 bricks later, the first LEGO Drum Kit was born.

“People often ask me why I did this, and my answer is, ‘Why not?’” Melick said. “It was a challenge one had never done before.”  For the heck of it, Melick said he reached out to Modern Drummer magazine, DRUM! magazine and the LEGO Brickfair about his project.  The drum and LEGO worlds responded to Melick, with bigger ideas for the specially made kit than to let it sit and gather dust.  Within the next few months, Melick said the LEGO drum set will be featured in Modern Drummer’s “Kit of the Month” column.The drummer also applied to be an exhibitor at Brickfair.  “I wanted to see if they’d be interested in it,” Melick said. “I thought maybe they wouldn’t think anything of it, but they responded saying, ‘We would absolutely love this.’"  Melick was an exhibitor at the annual LEGO convention in Virginia this past summer from July 29 to Aug. 2.  “I brought the whole drum set, except for the cymbals,” Melick explained. “When people came up and were interested, I always flipped it around and would say, ‘Hit it. Hit it like a heavy metal drummer.’ I wanted people to know this wasn’t a replica of a drum set made with LEGOs – this was real.”

When Melick shows the drum kit to colleagues and friends, their response is always shock and amazement.  “We do all kinds of stuff here with different types of drums, and I just couldn’t believe it,” Chris Toma, a friend of Melick’s who runs the drum department at Parkway Music in Clifton Park, said. “Naturally, guys like us are tinkers, but Brian put a boatload of work into this and made a marketable instrument. He proves the sky’s the limit to what can be used to create music.”  After the positive feedback, Melick also reached out to the Percussive Arts Society, which represents all cultures in the global drumming community.  The society has a famous museum, the Rhythm! Discovery Center, in Indianapolis, Indiana, and wanted the LEGO drum kit as part of their permanent exhibit.  Melick, who said he was deeply honored at the request, asked if he could build the museum a second LEGO drum kit to use. “I’m so grateful and overjoyed they see the quality in the work I’ve done, but these are instruments I use to perform,” Melick said. “I want to give the museum a complete drum set they can have forever, with cymbals, a pedal and everything, and I can keep playing the original everywhere I go.”  Melick said the total cost of materials, travel and the trip is around $4,500, and he hopes to complete the second drum kit by the end of November, which is International Drum Month.

“This is completely out of pocket, but definitely worth it,” Melick said. “This is like an artist getting put into the Metropolitan Museum of Art. As corny as it may seem, generations from now, there could be a relative who becomes a drummer and how cool will it be that they could go to this museum, and see their grandfather made this unusual drum set? It’s not always about how much money you make - sometimes, it’s just about your contribution to the craft and your passion.”

The musician said apart from his success, he is excited to share the project with as many audiences as he can.  Melick said he has educated all ages about percussion for several years, and is working to develop a curriculum with the LEGO drum kit to teach math, physics and inspire others to create music with unconventional products.  “I want people to know that life is music because it can be created anywhere – anything can be an instrument,” Melick said. “You just have to stop and listen.”

For more information about Brian Melick’s performances and success with the LEGO drum kit, visitwww.uduboy.com.